My World Series of Poker Heartbreak! 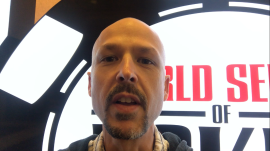 Last week I was in Las Vegas for the World Series of Poker (WSOP).  I had my sights on a WSOP cash.  It’s something I have never done before and it’s first on my poker Bucket List.  My plan was to play and cash in Event #25, the $1,000 buy-in Pot Limit Omaha (PLO) event.  I won’t go deep into the intricacies of the game but it plays similar to Hold Em except you get 4 cards rather than 2, must but can only use 2 cards from your hand, and can only bet up to the amount in the pot.

I have played a lot of Hold Em over the last 15 years but over the last 3 years I have started to really enjoy learning and growing at PLO.  I have a very solid grasp of cash game strategy but this would only be my second PLO tournament I have ever played. Last year I played in the $565 buy in PLO WSOP event.

So last Tuesday was the day.  It’s always really exciting sitting down to start a new tournament with a full stack and a pristine uncracked dream.  Especially when its at the WSOP, one of the biggest stages in poker.

The event was exhilarating especially when I tripled up to 15k in chips somewhere around the 4th level of the tourney.  I ran it up even more to the point of having almost 40k in chips.  Then about 30 minutes before the dinner break, during level 6, the green felt sharks began to swirl.  Poker pros with obviously more PLO tournament experience than myself started to lean heavily with aggression on those who were trying to protect rather than grow their stacks.  See, in tournament poker, the forced bets called the blinds go up every round.  In this tournament, the rounds are 1 hour.  We were on level 6 when my game started to unravel.  After call/folding or raise/folding on about 4 hands in 30 minutes, my stack went from about 40k to 17k.  Luckily, the dinner break came along and threw me a life preserver.

At the dinner break, I did some soul searching and realized clearly what was happening.  I was playing too tight and trying too hard to protect my stack just to make the money.  I grabbed some food, headed up to my room, and spent the next hour watching PLO tournament instructional videos while getting some well needed stomach fuel.

After the dinner break it was on to level 7.  No more getting pushed around. I had made the decision that I was going to find my spot with good equity to double up.  I found that spot when my A-Q-10-5 hand with 2 diamonds flopped top pair with a flush draw.  To make the long story short, I bet, he raised, I pushed all in, he called, and I proceeded to lose the hand.  That’s the bad news.  The good news is that I had 60% equity to win the hand and rather than continuing to let myself be pushed around I took a stand at the correct mathematical moment.  Unfortunately, cashing this tournament was not meant to be.

In tournament poker, if you get all your chips in with the the best chance of winning, that is all you can ask for.  Over the short run, luck may trip you up, but over the long haul good decisions with good equity will always prevail.

While I was certainly heartbroken that I didn’t cash the tourney, I felt proud of how I much I learned and how quickly I was able to adjust on the fly.  I feel like I grew enough to be much better prepared come next year.  While it’s very early, I can’t help but start counting down the days until next year’s World Series of Poker.  Until then, it’s time to fertilize my bankroll in the next 6 weeks leading up to the Arizona State Poker Championship tournament.  Deal me in!!